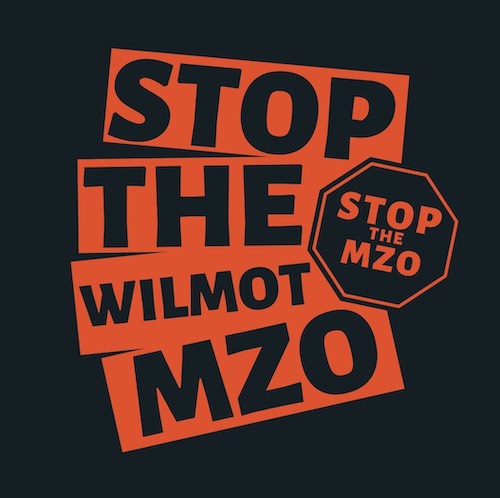 The Wilmot Ministerial Zoning Order (MZO )has been withdrawn by Cachet Developments!

Thank you to everyone who rallied and spoke up about this absurd MZO that would have had such negative impacts in our community and across our province.

The developers cited the tremendous push-back from citizens and the many concerns raised by community groups as the reason for the cancellation of the request for Wilmot Township to consider their MZO.

The development proposal will now follow proper planning processes and be considered under the Regional Official Plan Review currently underway.

Late on Christmas Eve, citizens discovered that the Township of Wilmot had just posted notice of a Ministerial Zoning Order (MZO) request.

The MZO request has caused considerable concern in the community as MZO’s have become so ubiquitous and despised elsewhere in Ontario and we have largely avoided them here in Waterloo Region. The timing of this MZO is highly suspicious – being announced at the last minute late on Christmas Eve with a Special Council Meeting scheduled at dinner time on the first day back (January 4th), almost no information available during the holidays, at a time with almost no ability to reach Staff, and little opportunity for local media coverage, while also in the midst of the most serious COVID-19 variant seen thus far.

When Wilmot finally released information a week later, it wasn’t just for a subdivision as feared but an entirely new town – Wilmot Village – between New Hamburg and Baden with homes for thousands of people, seniors apartments, supposedly affordable housing, employment lands, retail stores, a transit hub, and even an agrihub (whatever that is). Citizens and community groups in Wilmot scrambled to delegate at the January 4th meeting and with 200+ people in attendance at the virtual meeting more than a dozen delegations raised considerable concerns about the development proposal and the MZO request.

The developer struggled to provide answers and justify the need for the MZO other than they were using it in an attempt to bypass the Regional Official Plan Review currently underway, bypass proper planning procedures and get immediate approval. Wilmot Councillors, concerned with so many issues being raised by the public and seeing the developer woefully unprepared have asked that questions be submitted to the Township to be addressed by the developers at a Special Council meeting planned for February 14th.

While it initially appears that this MZO is just about two farms in Wilmot, it actually has far-reaching consequences for the Region of Waterloo and all upper-tier governments across the province. It appears that the primary purpose of the MZO is bypass the Regional Official Plan Review currently underway and destroy the proper regional growth and infrastructure planning process by having the Minister arbitrarily order the approval of these developments immediately, in isolation, and with little regard to all integrated planning usually required.

This MZO bomb of Wilmot elbowing others out of the way to get this significant growth at any cost could likely set off a chain reaction of competing MZO’s from other developers, and raise animosity between previously cooperative municipal governments such as North Dumfries Township and Wellesley Township, who will then race for their own MZO’s to get their desired growth. 40+ years of shared success here in Waterloo Region could be in jeopardy.

Should Wilmot Township approve the MZO, they will have pulled the trigger and launched an unprecedented attack on our Regional government and neighbours – purposely seeking to cut them out and bypass our upper-tier and destroying the ability for the Region of Waterloo to guide growth, intensify our core areas, co-ordinate plans, protect our countryside, and continue our incredible success.

Almost everything that we take for granted today is a result of good planning, collaborative governments, and communities working together that will no longer exist when it is a free-for-all of developers and municipalities by-passing all local and regional planning processes for an avalanche of MZO’s from the Minister and Premier so eager to issue them.

We have detailed Regional Official Planning processes for good reason. They have served us well to date creating our leading communities and success – in fact, so much of our success in Waterloo Region has come from doing this integrated, progressive planning better than most others and creating the smart growth, balance, and results that most others only dream of. People too often underestimate how long it takes to create good things and how quickly it can all be destroyed.

Aside from the MZO approach, there are still numerous other troubling issues regarding this proposed Wilmot development. Additional information can be found in the links below.

Minister Clark has states that he won’t approve an MZO without local Council approval first that has to involve public feedback. We need to speak up loud and clear regarding the inappropriateness of using MZO’s to plan the future of our community and the chain reaction that this MZO could unleash that could destroy our Regional Official Plan Review and all the good planning responsible for our success that we too often take for granted.

It is shameful to see developers even trying to use MZO’s here in Waterloo Region when we are renown for good planning and lead the province with our SmartGrowth success. This MZO is designed solely to bypass our Regional government and our Regional Official Plan Review currently underway regardless of the costs and potential implications.

Please speak up for the future that you would like to see by e-mailing officials at the addresses below and tell them to reject this MZO.

The Wilmot Township Clerk can be reached at: clerks@wilmot.ca

Wilmot Township Planning Staff can be reached at: harold.okrafka@wilmot.ca

The Wilmot Councillors can be reached at: